Cameron Olsen believes in three things: the duty to his badge, the honor of being a police officer, and the love he has for his partner.

As a member of Torontoâ€™s elite Special Investigations Unit, he has the privilege of working with Jaden Black, a powerful but naive telepath. As they hunt down a child rapist and killer and the case takes an unexpected turn, Cameron questions his badge, his profession, and who exactly his partner is, and what sheâ€™s been hiding from him.

All of the sudden, Jaden froze. Panic radiated from her. Not words, but pure emotions hit him square in the chest.

Jaden choked down the bite of muffin sheâ€™d been chewing on. She closed the lid of her laptop, stuffed it in the case, and hurried out of the coffee shop. The pain she projected left him surprised no one else stopped to stare at her.

He grabbed their drinks, leaving the half-eaten muffins on the table. He shoved past a dark-haired woman going into the coffee shop as he ran after Jaden.

He found her curled in a ball in the backseat of her SUV. Tears streaked her face, her heavy eye makeup running into a mess. He climbed in, opening his arms to her, and she buried her face in his chest. He patted the back of her head, smoothing her jet-black bob. His heart broke a tiny bit. He could count on one hand the number of times heâ€™d seen Jaden this upset. Whatever she felt, it was bad and had changed his crass, flippant partner into a scared kid herself.

Images flashed into his brain. He could make out the dark figure of a manâ€¦and the chain. He could feel the squeeze around his neck and her final thought of how she wanted her mommy.

Available: Wherever quality ebooks are sold!

Hello everyone, Goddess Fish is hosting my tour for “Boots on the Ground” This week and next week. 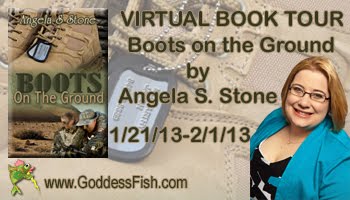 There has been some interested in an additionalÂ excerptÂ for Ash and Matthew, since I love these two boys so much, I give you anÂ excerptÂ I like to call “Dinner and Desert”:

Ash stomped his boots off on the porch before opening the door to the mudroom. He still had three more hours in his shift. The shift was running slow though. The snow had kept most people home and off the roads. He called Matthew and asked him to make dinner for the two of them, as he would be able to stop atÂ home to eat.

â€œHey,â€ Matthew called from the kitchen once Ash shut the door against the cold.

â€œHey,â€ Ash called back. He wiped his feet off further and walked on the mat through the hall. He didnâ€™t take his boots off in case he had to leave in a hurry.Â

Matthew stood at the stove hovering over a pot of something that smelled amazing. He smiled at Ash as he entered the kitchen. â€œHowâ€™s work?â€ Matthew asked, turning around to face Ash.

â€œSlow.â€ He grabbed Matthew and pulled him towards him. Matthew dipped his head just enough to reach the slightly shorter man and tug his lips into a dominating kiss.

This was the first time they had properly seen each other in three days. Matthew had been working nights, and Ash had been on day shift. He hated when that happened. At least this was his last shift on this set. They had the next four days off together. Just the two of them. Ash couldnâ€™t wait.

Matthew pulled away grinning. â€œThink you can get off early?â€ he asked.

â€œNo, Iâ€™m needed in case thereâ€™s an accident, knock on wood,â€ Ash said. They both rapped on the kitchen cabinet door. â€œSorry.â€

â€œStarving,â€ Ash replied with a look that indicated that he was hungry for more than just food.

â€œDown boy,â€ Matthew told him. â€œI made clam chowder. Sit. Iâ€™ll get you a bowl.â€ Ash dropped himself in his spot at the kitchen table.

Matthew set a bowl of clam chowder and a basket of tea biscuits in front of Ash. â€œDo you have to go?â€ he asked, sitting down at the table.

â€œUh-huh.â€ Ash took two tea biscuits from the basket. They were still warm.

â€œYes. I had to call Mom for the recipe though,â€ Matthew said. He also took two from the basket and buttered them.

â€œHow is it that I get a man who can cook and makes me dinner on a regular basis?â€

â€œJust lucky I guess,â€ Matthew said and Ash smiled. â€œEat before it gets cold,â€ he instructed.

The two men tucked into their simple but delicious meal, devouring the entire thing. â€œThat was amazing,â€ Ash declared pushing his chair back from the table.

Ash stood up and picked up their empty bowls and side plates. They got dumped into the sink. He went to turn the water on but a pair of strong arms slipped around his waist stopping him. â€œMatt?â€

â€œLove you,â€ Matthew whispered, planting a kiss to the nape of Ashâ€™s neck.

Matthew spun Ash around and pulled him as close as the duty belt and bulletproof vest would allow. He pinned Ash against the counter rubbing their crotches together.

â€œLove you too,â€ Ash murmured back. They kissed, the edge of the counter digging into Ashâ€™s back as his hands wandered down squeezing Matthewâ€™s ass though his jeans. That made Matthew growl louder than usual.

Matthew broke away kissing a spot on Ashâ€™s neck. â€œWhy donâ€™t you find out what I have waiting for you,â€ he whispered into Ashâ€™s ear.

Ash groaned. Matthew stepped away enough for Ash to get his hands on his partnerâ€™s belt. Ash undid it, and his hands slid inside Matthewâ€™s jeans and boxer briefs. His fingers caressed Matthewâ€™s semi-hard length. â€œVery nice,â€ Ash commented. He rolled the head in his fingers causing Matthew to hiss.

â€œMmm, but thatâ€™s not the surprise. Keep looking,â€ Matthew said with a sly smile.

â€œGive me a hint,â€ Ash said, enjoying this game. His fingers brushed against the top of Matthewâ€™s ass.

â€œBurning hot, but not quite,â€ Matthew said with a hitch in his voice as Ash slid a finger into his already lubed ass. Instead of the warm and slick tunnel he expected, Ash met a hard resistance just inside, â€œAnd what is that?â€ he asked.

â€œItâ€™s called a low profile. Thereâ€™s a hidden base so it can be worn at any time, and no one can tell itâ€™s there,â€ Matthew said his eyes narrowing as he gave his partner a mischievous smile.

â€œAnd itâ€™s for me?â€ Ash asked. He already grew harder at the thought, if that was possible.

â€œYes, it is. Youâ€™re going to wear it for the rest of your shift.â€

â€œIf itâ€™s for me then why are you wearing it?â€

Hope you enjoy and don’t forget to check out the tour! One luck comment will win a $25GC!
Xx
Angela

Ok that that you’ve recovered from the shock of this week’s Six sentence sunday. It’s background time. WARNING!!!!!!!! This post is filled with spoilers for “Boots on the Ground”

Leave now or be spoiled!

Okay. You’re still here are you? I guess you *really* want to know why David is sleeping with a woman… Not just any woman I might add. His Ex-wife.

First off I posted this six because I wanted toÂ gaugeÂ some reader reaction. I have this scene and I’m hesitating to put it into “Boots”. Â Basically as you can already guess from the blurb. Jason is MIA inÂ AfghanistanÂ and it’s been about 4 weeks here. David is prepared to have Jason not come back. He believes that Jason is most likely dead.

Carole (David’s ex) comes over late, drops the kids off and tucks them into bed. Afterwards they’re talking and then suddendly they’re kissing and they end up in bed together.

David regrets it even before they’re finished sleeping together and eventually they both agree it was a very large mistake and it won’t happen again. (Oh come on, like you’ve never slept with an Ex).

(Ready for theÂ spoilerÂ part?) When Jason returns home (oh come on you knew he was going to get rescued) he struggles with his feelings about returning home and beingÂ rescued. Jason sinks into depression and after three weeks of being home he admits that he’sÂ afraidÂ that David will leave him. He reveals to David that he slept with Ash while they were MIA. NotÂ becauseÂ he loves Ash but because they both needed it in that moment.

David is hurt but he tells Jason he can’t be mad at him because he Â slept with Carole while he was MIA. This information pushes Jason over the edge. Â He picks up a gun (albeit unloaded).Â DavidÂ stops him and takes the gun away calling 911.

This action forces Jason to get the help he needs to face everything that he’s been through. So David sleeping with Carole is an utterly important moment, but I’m wondering if it can be left out and made a shock or if it should go in the book, or if I should just send the whole thing into the scrap heap!!

What do you think?