Hello Everyone! Thank you for stopping by the Birthday Blog Hop!! 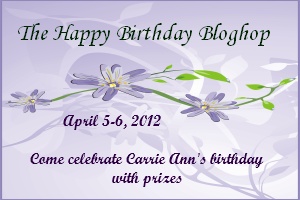 The hop is very special this year as I’m actually hopping(okay I’m driving the 8 hours!!) over to Carrie-Ann Ryan’s house to celebrate her birthday!

Here’s a snap shot of when we got together last year :)!

If you missed the story about the first time Carrie-Ann and I met you should check out her blog interview here!!

Don’t worry Carrie I promise no wheelchair throwing this weekend!

Onto the fun stuff!

I am giving away 1 EBOOK copy of my debut novel “Sometimes It’s Fate” which comes out to PRINT May 8th!

“McCarthy,” Jason answered his cell phone sleepily. David mumbled in his sleep next to him and rolled over.
“Where are you?” Craig‘s distressed voice floated over the line.
“In bed.”
“Where?”
“In my apartment.”
“Since I‘m at your apartment I highly doubt that.”
“What?” Jason sat up in alarm and slid out of bed. He padded out of David‘s bedroom and into the hall. The clock read four a.m. “What the hell are you doing at my apartment at four a.m.?”
“I think the question is why aren’t you at your apartment at four a.m. You‘re not working.”
“I—don‘t turn this around. What‘s wrong Craig?”
“Can you come back here, or can I go there or something? Please…”
“Craig you‘re scaring me.”
“I‘m scaring myself Jase.”
“I‘m at David‘s. I‘ll give you directions.”
“Alright.”
Jason gave Craig directions to David‘s house and hung up. He went back into the bedroom and pulled on a pair of pj pants.
David shifted in his sleep. “Jason,” he mumbled reaching out. “Who was that?”
“Craig,” Jason told him sitting on the edge of the bed.
“What time is it?”
“Just after four.”
“What did he want?”
Jason sighed. “I don‘t have a clue. He was at my apartment. I told him to come here.”
“Jason.”
“Sorry just—trust me, something is wrong, very wrong. Why else would Craig drive up from Moncton and be at my apartment at four a.m.?” Jason leaned over and kissed his partner. “Go back to sleep.”

David nodded and rolled over. He fell asleep wondering just what was going on.
“I don‘t know what to do.” Craig‘s voice jolted David from his sleep. He glanced at the clock. It was just after five.
“I can‘t believe you were so stupid,” Jason hissed back.
“You‘re one to talk.”
“That is fucking different and you know it.”
“Different how?”
“I wasn‘t stupid enough to have unprotected sex with someone who I knew was positive.”
“I didn‘t know.”
“Then you shouldn‘t have been stupid enough to have unprotected sex.”
“You think I don‘t know this Jason? Fuck.”
David rubbed his face and sat up as their conversation continued.
“How many other guys have you lied to?”
“I never lied to you.”
“That‘s bullshit and you fucking know it.”
“No it‘s not, okay? Everyone else was fine, you were fine.”
“I thought you were too. When‘s the last time you were tested?”
“A week ago.”
“Before that Craig.”
“I dunno a year, year and a half.”
“How the fuck could you be so stupid? You not only put yourself at risk, you put me at risk.”
“I‘m sorry.”
“You‘re sorry! You‘re SORRY!”
“I didn‘t wake up and decide to get HIV, Jason.”

and all other major ebook resellers!

Coming in Print May 8th!!

Also! by commenting here you have a chance to win the BIG BLOG HOP PRIZE!

Thanks and happy hopping!